Five years on since the US recession ‘officially’ ended in June 2009, urban land prices are rising, the pattern of history is repeating, and this time, the players on the chessboard have changed.

But our Governments are turning a blind eye.

They have yet to acknowledge why the crisis happened, or put policies in place to prevent it happening again.

Expensive welfare systems, elaborate tax and transfer policies, and the financial ‘cures’ following the previous land induced crash in the early 1990s, did nothing to prevent the swiftest and sharpest synchronised global downturn in human history.

Taxpayers were punished, bankers got a “get out of jail free” card, and the largest real estate investment trusts spent $50 billion purchasing 386,000 foreclosed homes, to rent out to previous owners who believed and acted on the lie; “there is no bubble.”

The IMF, and policy makers are now twisting themselves in economic knots trying to pin down a ‘cure’ for the dangers of excessive house price inflation, they readily admit lead to most banking crises, with Australia featuring in the top five of each of their highlighted risk assessments.

“……our research indicates that boom-bust patterns in house prices preceded more than two-thirds of the recent 50 systemic banking crises…..” IMF “Era of Benign Neglect of House Price Booms is Over” June 11 2014

The IMF claims the ‘neglect of house price booms is over’ but as the OECD ‘Post Mortem’ of the 2008 crises reveals, these economists can’t see

They ignore the role that rent (unearned income,) debt and the financial sector play in shaping the economy.

They have a colourful history of recurrent boom bust land cycles, all replete with rampant speculation and easy credit, spanning in excess of 300 years from which to study … and yet;

“The macroeconomic models available at the time of the crisis typically ignored the banking system…” (OECD Forecasts During And After The Financial Crisis: A Post Mortem – February 2014)

In other words, based on the aesthetic qualities of their equations, the 2006/7 bubble couldn’t exist. A story we hear repeated every year as prices continue to defy gravity and economist try and explain it away with ‘sound fundamentals.’

It promised to lead to efficient markets and lower unemployment

But at the onset of the GFC, unemployment in developed nations rose above any previous recession of the past three decades, whilst wages, as a share of GDP plummeted to their lowest point since the Second World War. 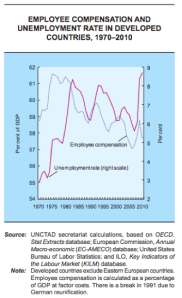 “This should be a wake-up call…” concluded the UN in their annual Trade and Development report that revealed the findings;

“There must be something fundamentally wrong with an economic theory, that justifies the rise of inequality mainly in terms of the need to tackle persistent unemployment.” Annual report by the UN Conference on Trade and Development 2012, Ch 11. Section C (analysing the effects of “labour market flexibility.”)

In the UK, Bank of England has imposed a 4.5 times loan to income cap on 85% of mortgages, along with various ‘stress tests’ to please the regulators.

But the Council of Mortgage lenders show only 19% of recent London mortgages are at or above this ratio, whilst the national figure is a mere 9%.

By volume, London accounts for around a quarter of loans nationally, (Q1) so the 85% cap will do little to nothing, except perhaps eliminate home ownership for low-income groups.

But stemming inflation or deterring speculative activity is not, and never will be, Central Bank policy;

Carney – “These actions should not restrain current market housing activity … these actions will have minimal impact in the future if the housing market evolves in line with the Bank’s central view,” (i.e. up) Guardian – “Bank of England will not act on house prices yet” 27 June 2014

In the U.S.A just five megabanks and their holding companies control a derivatives market worth hundreds of trillions of dollars, in Australia the ‘Big Four’ command 80% of the market and 88% of residential mortgages.

‘These are the men who have the most economic power in the world’ wrote British philosopher, mathematician and historian, Bertrand Russell, one of the 20th century’s leading logicians; “..and they derive it from land, minerals, and credit, in combination.”

Russell understood only too well, that all productive gains, every improvement in society and the economy, would be capitalised into rising land values, enriching those who owned the assets but more so, those who created the credit and traded on the debt.

Milton Friedman meanwhile tutored that societies are structured on greed.

But greed means taking something from another, grasping for a larger slice of the pie. (see; pareto efficiency.)

Greed is not a natural feature of a well functioning community; rather it’s a feature of a dysfunctional economy that allows a country’s wealth to gravitate into an elite nucleus of financially strong hands.

It remains that the economy is fuelled by what is termed the FIRE sector – Finance, Insurance, and Real Estate.

The FIRE Economy is dependent on rising asset prices – on you and me buying houses – so it can extract economic rent.

The banking sector pumps a colossal amount of credit into the system by way of a home loan. Real estate businesses sell the products – some trading as REITs – insurance companies underwrite the owners debt, property, and income, and as the interest payments compound – doubling and doubling again – the debt is recycled into more lending, more borrowing, higher house prices – making those who trade on the debt in an obscure concentrated market of derivatives, increasingly wealthy. 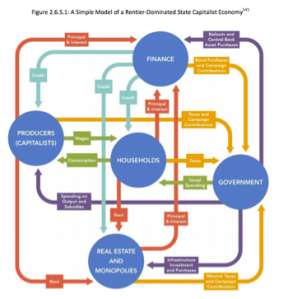 The Government, many members of which come directly from the industry itself, receive substantial payments from the FIRE sector.

For example, between 1998 and 2008 the banking industry spent $3.4 billion lobbying the US government.

In Australia, the ICAC investigations into Illegal donations from developers and “wealthy property tycoons” reveal tens of thousands of dollars have been used to influence decisions by local, state and federal governments.

It should therefore be of no surprise that ‘affordable housing policy’ always seems to work in reverse.

Generous subsidies are handed over to investors – all of which are capitalised into land prices.

Restraints on supply are imposed, ‘rich neighbourhoods’ are protected from over development, land on the fringes is no longer dirt cheap, acreages are banked, exempt from State Land Tax until subdivision at the owner’s pleasure.

“Only the little people pay taxes” (i.e. work for a living) – we can all become wealthy through property investment, dining out and trading on leveraged gains, perhaps donating a little to charity, or taking part in some publicity-generating event to raise funds for homelessness along the way – as our politicians are fond of doing.

Of course, first homebuyers suffering alarm at rapidly escalating costs are necessary oxygen for the system.

So their judgement is manipulated as housing affordability is now reclassified as mortgage serviceability – how far the paycheque can stretch each month rather than highlighting the upfront cost, while young buyers are encouraged to enter the market as speculators, living off their parents, until they gain a ‘foothold’ from leveraging the equity.

Banks assist with an array of financial products – offset accounts, honeymoon rates, shared equity schemes – mortgages treated like credit card payments, where all that’s required is the interest and should the market collapse with money still outstanding, they’ll collect the house too.

The result is land is now used for greed rather than need, pushing city boundaries outwards, requiring an excessive use of durable capital, which eventually leads to a shortage of loanable funds.

You will never be told the system can fail.

Instead you will hear that house prices can maintain a ‘high plateau’ – stagnate for a while until we all ‘catch up.’

However, the increase in the annual rate of growth is now part of the income that buyers pay for and lenders rely upon.

This is how real estate is sold – investors gravitate to areas that advertise ‘good capital gains,’ calculating the land’s value based on both the rent a tenant will pay plus the projected annual increase (land rent.)

Buyers live in fear of land values collapsing, yet, while prices trend higher, expectations over shoot the mark by no small degree. Landowners treat their unearned increment as income, raising consumption, lowering saving, putting to upward pressure on inflation, which eventually results in interest rates rising.

Never, throughout the course of history, has such a process been economically sustainable.

At some point the productive capacity of the economy can no longer support the boom – and as Australia’s history of land induced financial crises reveal, the end is not always as kind as experienced in 2008. Bubble Economics: Australian Land Speculation 1830 – 2013, by Paul D. Egan and Philip Soos

“House prices don’t always go up” warned the Governor of the RBA, Glenn Stevens at a recent speech in Hobart, just as he did in March, – a message he has repeatedly reiterated since appearing on Seven Network’s Sunrise in 2010.

But Australian investors aren’t listening to Glenn – they’re reading the media headlines, covering the latest findings in the BRW Rich 200, which shows property to be the ‘single biggest source of wealth,’ and entrepreneurs “piling into property faster than ever.”

But while Triguboff paid a lot for his land, but he did not make his cheque payable to the local school, park, rail network, or the array of public and community services that yield his land a healthy source of locational revenue that grants such windfall gains.

His payment went direct to the previous owner of the land, who pocketed the profit, while the funding needed for maintaining the facilities and attracting workers to the city, come from an elaborate network of taxes, which fall primarily on income and productivity – ‘the little people.’

This is the kind of rent seeking most of us have some experience of, a process that effectively punishes and disheartens the priced out sectors of the community, whilst encouraging the hoarding of land as the road that leads to riches – thereby ignoring the social and ethical problems that result from the process.

The effect is to turn us into a nation of speculators where moral judgement is subverted by the unearned yields one can receive.

Investigate most societal problems, wages, housing, health, poverty, the loss of jobs to off shore markets, and this will be found at the root.

No one is born into poverty or inequality – these things are not by-products of nature – in a modern society the extremes we experience that lead to protests and riots over cuts in expenditure to welfare (a requirement exacerbated by the process outlined above) are due to policy and political ignorance.

When the Henry tax Review in 2008, concluded “economic growth would be higher if governments raised more revenue from land and less revenue from other tax bases”

It was onto something important.

Lifting taxes off labour and restructuring our tax and supply policies is a good start, but alone it won’t do. Removing the power embedded in the banking industry to create credit based on their own vested interests is equally important, it would free up the creative capacity of the community and move instead toward a society and culture that is able to provide for all.

However it remains, that every effort in history to effect the changes suggested above have been fought by the establishment. In this respect, change can never come from the top down. It requires a system that can return democracy to the people through a slow process of re-education, and it’s a system we need to advocate if social and economic justice is the goal.

But until such a time, it’s business as usual, the cycle will play out the same and we have a way to go yet – but be well aware, the date for the next global financial crisis has been set.

(For information on specific timing for the current cycle please contact me direct.)

Error: Twitter did not respond. Please wait a few minutes and refresh this page.